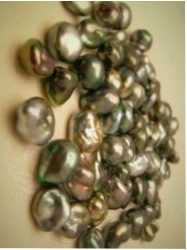 Keshi pearls are some of the most mysterious organic gems on the jewelry market because it is extremely difficult to classify them correctly. They are the rebellious rejects of the pearl series because many jewelers do not consider them to be authentic cultured pearls.

In spite of their controversial nature, Keshi pearls are uniquely elegant. They boast a distinct type of glamor that is best suited for bold women who want to add a touch of mystery to their look. Let us tell you a bit about Keshi pearls so that you can get a better idea of just how amazing they can be.

What are Keshi Pearls?

Keshi pearls are non-beaded pearls which are produced accidentally during the pearl culturing process. They are formed either when oysters reject the implanted nucleus and expel it before the development process is complete or when the implanted mantle tissue fractures. This leads to the formation of separate pearl sacs that do not include nuclei, which will eventually produce non-nucleated pearls.

Their name comes from the Japanese word “Keshi”, which means poppy seed. Keshi pearls were first discovered as part of the Japanese Akoya pearl culturing process. Farmers observed these abnormal pearls in their crops and called them seed pearls because they looked similar to poppy seeds.

The Science of Keshi Pearls

Natural pearls form when an irritant enters the oyster and determines an inflammatory reaction from the mantle tissue. The irritant could be any type of minute organism, which will cause an organic reaction in the oyster. This is very similar to the reaction that the human body has to foreign organisms. When a sizable non-self-organism enters the body (such as a splinter), it will cover it up in connective tissue to seal it in and prevent its development inside the body. This leads to the formation of foreign body granulomas, which have a similar structure to that of natural pearls.

The oyster will form a thin layer of nacre around the foreign organism and then continue to produce layer after layer of nacre. As a result, natural pearls are mainly constituted of these nacre layers and have a tiny nucleus which is the encapsulated foreign organism. Take a look at this video to get a better idea of the process.

The pearl culturing process is based on the natural pearl production process. Pearl farmers manually introduce a foreign body into the oyster, thus determining the inflammatory reaction of the mantle tissue. The end result will be a pearl that has a pre-chosen nucleus.

To optimize the cultured pearl production process, the chosen nucleus is usually a portion of shell or even a small pearl. Moreover, pearl farmers often use spherical nuclei to facilitate the formation of round-shaped pearls, which are the standard in the pearl industry.

As for Keshi pearls, they are formed when the culturing process fails to lead to a pearl. The oyster will reject the implanted nucleus and eliminate it, but the inflammatory reaction will take its course where the foreign body was introduced. As such, Keshi pearls come in a wide variety of shapes and sizes precisely because the nacre layers will form erratically.

Keshi pearls are made entirely of nacre and do not feature a foreign body nucleus. This makes them somewhat similar to natural pearls, rather than cultured pearls, but their production process makes them a unique occurrence in the pearl series.

The fact that they lack a nucleus altogether is the main reason why some jewelry experts do not consider them to be real cultured pearls. They are regarded as a bi-product of the pearl culturing process, which gives them an entirely different standard on the jewelry market.

The main goal in pearl culturing is obtaining large-sized and perfectly round-shaped pearls. Due to the fact that the pearl production process is quite lengthy, pearl farmers have implemented a simple precautionary technique meant to reduce the occurrence of abnormal pearls.

After the pre-chosen nucleus has been introduced inside the oyster, pearl farmers will X-ray their crop and eliminate all the oysters that have evolved abnormally. It is far more financially advantageous for them to remove the erratically formed nacre and introduce another nucleus than to have that oyster develop a non-round pearl further.

As such, Keshi pearls are quite rare these days. They are usually produced in less developed pearl farms or in those that aim precisely for baroque and Keshi pearls. At the moment, they remain widely accessible on the jewelry market and they come at far more accessible prices than round-shaped pearls.

The terms “Keshi pearls” and “baroque pearls” are commonly misused because there is a poignant similarity between them. As a disambiguation, the term “baroque” refers strictly to the shape of the pearl. All irregularly shaped pearls are collectively referred to as baroque pearls.

The term “Keshi” is used in relation to the structure and formation process of the pearl. It defines pearls with irregular shapes (thus, baroque pearls) that are formed as a result of an abnormality that occurred during their production process and led to the rejection of the nucleus.

While Keshi pearls cost considerably less than their perfectly rounded counterparts, they remain extremely valuable on the jewelry market. The impressive diversity they display makes them suited for creative jewelry pieces that can make use of their original display.

Explore the market to find some amazing Keshi pearl jewelry pieces. We guarantee that you will simply fall in love with these fabulous pieces because they boast an entirely different type of glamor. Take a look!

Each Keshi pearl has its own distinct shape generated by the formation of the nacre layers. As such, no two Keshi pearls will be entirely identical. However, they may be similar in shape and size, which makes them suited for elegant jewelry pieces.

Keshi pearl necklace designs often feature imperfectly round-shaped pearls, which provides them with a special type of boldness. They may be paired with other gems or metallic elements to make them even more daring and original. Whichever Keshi pearls necklace you opt for you are bound to be a very bold presence.

Keshi pearls earrings are bold pieces that can provide any woman with an effortlessly chic look that is bound to capture everybody’s attention. They can opt for single-pearl pieces or they can choose multi-pearl earrings that include ingenious assortments of brilliant baroque-shaped pearls.

These delicate accessories are immensely versatile because they are adventurous enough to complete daring outfits and yet delicate enough to be perfectly suited for cocktail dresses and business suits.

Keshi pearl rings are the ideal jewelry pieces to compliment the uniqueness of these wonderful organic gems. They often feature one large Keshi pearl as the centerpiece and a metal lining which is aimed to highlight its delicate shape.

These rings are statement pieces by definition and they will complete any type of outfit, ranging from the most sophisticated formal attire, and all the way to spontaneous casual and boho outfits.

Yet another eye-catching statement piece, the Keshi pearl bracelet is a daring accessory that will make any outfit complete. You can choose single-strand bracelets or you can opt for an even more adventurous option, the multi-strand Keshi pearl bracelet.

We hope we have provided you with new and useful information about Keshi pearls and that you now have a better idea of their immense complexity. Explore the market to find some outstanding pieces that will make your jewelry box complete.